Busselton SHS has been built upon the legacy of the Sayers family. The pioneering Busselton couple, Carinia and Flora Sayers left their land for the purpose of providing a site for an educational institution. Established in 1958 and growing from a rich heritage, BSHS holds its history with honour.

The land on which Busselton Senior High School now stands was provided by the Sayers family. Carinia Sayers, a Wardandi Noongar man from the Vasse region, lived at Cattle Chosen with the Bussell Family. Carinia was considered an expert with farm stock. When he took up the land where the school now stands, a small cottage was the only building on the site however a larger house was moved from land near West Busselton Primary School to where the present caretaker’s house is located on the grounds. Carinia Sayers married Flora in 1891 with Flora being recognised as one of the pioneer women of the district.

Carinia and Flora lived with their seven children in Busselton. Two siblings both recognised as Aboriginal Servicemen fought in World War 1. Both Carinia and Flora expressed a wish to leave their land for the purpose of providing a site for an educational institution. Although nothing was placed in writing, on the death of Flora in 1955, their children agreed for the wishes of their parents to be followed and so the land was transferred to the Education Department.

We are currently in the process of researching further information about the Sayer family and the school history. This will be updated as more information is validated.

The story behind our crest is one of rich heritage. It represents the Coat of Arms of the pioneering Bussell family that was presented to our school in 1959. The crest depicts three elements: 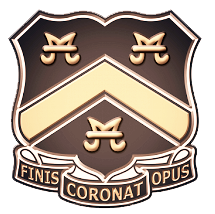 The Bussell Coat of Arms originates from the early Middle Ages when a Bussell Knight is reputed to have revived a King fallen in battle with water from his helmet. These relics of medieval times are derived from the distinguishing badges by which nobles identified themselves in battle. 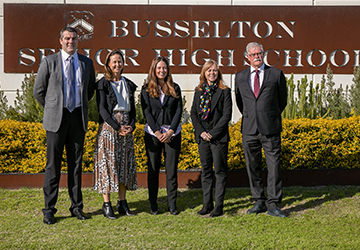 Hear about what BSHS has to offer!